A downloadable engine for Windows

A GameMaker:Studio project file (1.x and 2.x versions included) that lets you easily create an intertia-based and speed-focused platform game. All the assets in the demo are custom-made, included in the project file, and can be used in commercial games!

The demo doesn't use any harmful DRM, but due to being compressed, it might still be flagged as a false positive by some antivirus programs.

In order to download this engine you must purchase it at or above the minimum price of $14.99 USD. You will get access to the following files:

I always wanted to make my own sonic game, but can you guys ever picture my characters running at warp speeds (A cat who is used to rpg based life, a realm master penguin, a berserker monster cat)? lol! But seriously Yal, I like your work, you are a true inspiration!

Freedom Planet exists (very much legally), my engine isn't infringing on SEGA's intellectual property any more than that series is doing.

While there are a lot of similarities to Sonic 2, these are a homage and I am not trying to mislead customers into thinking that this is an official Sonic game (the efforts include, but aren't limited to, having a different visual style and character design, having a significantly different in-game HUD layout so that screenshots are easily distinguishable from that of Sonic 2, and having a clear and prominently displayed official name - without similarities to the series - as the page banner, in the screenshots, and in-game).

Besides, modern Sonic games - which should be more recognizable to a consumer than the decades-old Genesis originals - have branched out to have a lot of mechanics that this engine does not replicate, such as the character customization in Sonic Forces, 3D environments in Sonic Adventure and Sonic Heroes, and the ability to transform into a werewolf in Sonic Unleashed. Standard platforming movement - including inertia, sliding down slopes, etc - is too generic to be protected by copyright and trademark laws. (Are you going to post angry comments on Exo One next because you can roll down slopes in that game?)

Finally, this is an asset pack, not a game, so I'm not even directly competing with SEGA. What my customers choose to do with the engine is their responsibility - and using the engine to make a Sonic fangame could be a copyright or trademark violation - but you could make a Sonic fangame with Unity, Godot, or raw machine code as well, so there is nothing in my engine that specifically enables that type of despicable crime.

My asset is not illegal, and if you're going to keep slandering me I might need to take actions against you. I notice you registered very shortly before making your comment and don't have any other activity, which could be a sign that you're using an alternate account in a clear violation of the Itch terms of service...

Why does the player jitter so much when on slopes can you fix that this is almost what i need but that jitter looks like complete garbage and makes this useless.

Even on 45 degree slopes the player still jitters as if the angle of the player was jittering between angles of 45 degrees,46,47, back to 46,45,44,43 like it constantly switches between all of those angles on the same 45 degree angle when it should stay at 45 degrees if its on a 45 DEGREE ANGLE!! You should fix this. otherwise its garbage.

First of all, those are 30-degree slopes. The 45-degree slopes are so steep you slide down them if you try to stand on them.

The issue you see isn't angle jittering, it's caused by the demo having "interpolate colors between pixels" turned off, so all graphics are snapped to pixel-perfect coordinates. It usually makes pixelart look better, but having slopes and rotations gets all the sprites into non-integer-coordinate territory and then things get a bit iffier.

Your two main options to fix this would be either having interpolation turned on (which works the best if your graphics don't have a lot of crisp pixels), or have a special "draw angle" for the player that is snapped to, say, the closest multiple of 15 degrees:

Then just draw the sprite with that angle.

Well I bought it, and used the draw_angle solution. The player still jitters around everywhere and the player starts sinking into the slopes. There's soo many bugs. It feels like the player doesn't know what the angle of the ground is. The way the player is staying out of the terrian doesn't feel right at all very buggy. I turned on interpolation between pixels and it helped a little but that isn't a solution for a pixel art game. Even with that the issues with aligning with the ground still occur. The player just jitters all over the place. How can I fix it?

How big is the jitter / sinking? Single pixels or up towards entire tiles?

Instead of setting drawangle directly, you could try lerping towards it with angle_difference (so there's a smoother transition).

Love your work. And this asset continues that tradition of quality assets. There is so much good stuff here to chew on, and the included example characters are fantastic and fun. Also, the code is well commented and everything is super organized, which makes it a joy to explore.  Highly recommended.  Another great Yal production! 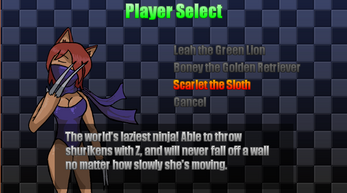 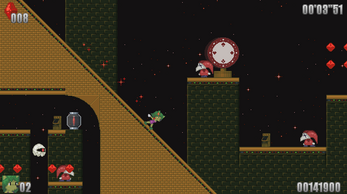 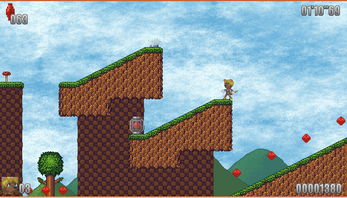 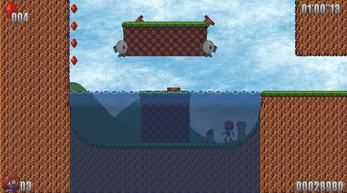 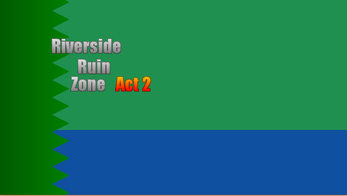 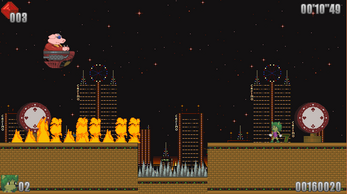 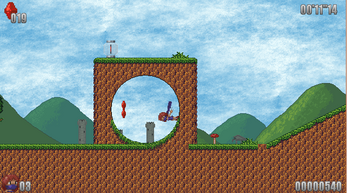 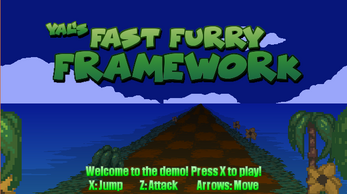 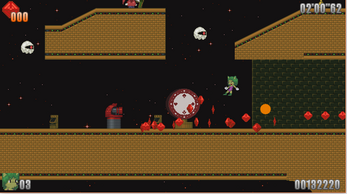