A downloadable engine for Windows

NEW feature as of 2016-05-17: Added a new version of the 3D source code that creates hovercraft models from paths. If you don't like or aren't good at 3D modelling, you can still make wonders for the racetrack! The new scripts are also relatively easy to wedge into an existing project made from the original 3D source file.

In order to download this engine you must purchase it at or above the minimum price of $4.99 USD. You will get access to the following files:

Hello,big fan since SoftEngine. However, my racers crash into each other at the very first corner, any idea how we can avoid that? They do in both versions, 2d and 3d

Oh wow, that's a blast from the past!

The big issue here probably is that all racers try to follow the center of the racetrack exactly, especially if they all have the same speed and turning values that also means they try to take the same turn. There's a bunch of ways you could adjust csc_ai to fix this...

Good fun! Not sure if you’re still maintaining this or not, but somewhere along the line GMS2 changed the way depth works, causing the skybox to get drawn over half of the screen. (It looks like someone else had a similar problem, but I don’t know if it was caused by the same issue or not).

Anyway, when you draw the skybox, you now need to force the depth buffer off (gpu_set_zwriteenable, as well as gpu_set_ztestenable if you really want) to prevent the background from persisting in 3D space after it’s been drawn. Not sure when GameMaker changed this, since it works just fine in GMS1. ¯_(ツ)_/¯

Also, I’m impressed that you managed to model everything in the game using exclusively paths. I would have just gone straight to 3D object files, lol.

GMS2 still doesn't have built-in support for loading OBJ files, and I don't want to include code I didn't make myself in any of my asset packs. I didn't start using Blender until a few months ago, so paths was the closest thing I had available at the time I made this. (Certainly better than having to hardcode vertex coordinates for every object, which I used in a previous project...)

There’s a compatibility script for the old GameMaker models, depending on how far you want to go with that (.d3d is a pretty obscure format).

Nice engine! I was wondering, can this be used for broken sections of track?

There's no code for it built into the engine, and right now there's basically invisible walls at the track edges, so it's going to need some work to add in.

Sorry for a noob question, but I downloaded the 3D code and tried to play in gamemaker 2 and it doesnt seem to render correctly, half the screen is clouds and the bottom is ground, but can't see the car. I can drive though as i move the track change and it seems to follow. All i did was download the new gamemaker2 and then import new. is thre something i am missing? TY

Hiya! Sorry for taking so long to reply.

It sounds like there's an issue with the depth sorting between obj_skyboxcontrol and the other objects... drawing has a bunch of odd quirks in GMS2 compared to previous versions, e.g. depth sorting doesn't work in Draw GUI event. Looks like ortho and perspective drawing are drawn in separate passes so ortho always is drawn last. To just get the track to draw properly, you could try commenting out the code in the Draw event of the obj_skyboxcontrol object. (You might wanna set up a background color in the room instead as a placeholder so that the window gets cleared each draw frame).

Not sure what the best way to solve the problem is, depends a bit on what graphical style you wanna go for in your game. If you want a stylish celshaded look you could keep a solid background color, for a more realistic style you could add some code in e.g. stage_model_create() so that it creates a skybox as well (the simplest approach would be to just add walls at the X and Y boundaries but it might look a bit flat). You can make texture atlases bigger than 2x2 (to add in some new sky textures etc), just don't forget to update the atlas-size arguments to stage_model_create() so that it gets the correct size - there's no info in the graphic asset that can be used for this so it needs to be provided off-band.

[SOLVED: read down below]

Awesome engine! It works quite well. The only problem I've found is that the car starts to move forward at a certain velocity, in my case it start to move at 7 units of the variable movespd... It depends on track length and step... The funny thing is it doesn't happen if the car is perpendicular to the track direction. I need your help, Yal!

Does it happen instantly or only when certain actions are performed? If it only happens when you're pointing in the direction of the track, it sounds like it could be the maths to translate between track position and room coordinates that glitch out.

Could you please answer the following questions? It'll help making it easier to narrow down the problem...

It happens instantly only when pointing in the direction of the track. Take a close look at the demo, it also happens in there but is not easy to notice. If you enlarge the track you will see it well.

Thanks, managed to get a 100% reproduction method working now... angle slightly, stand still, then tap 'accelerate'. I'll see i I can figure out what causes it.

I think I've figured out what's happening, but not WHY... the U position (how far you're along the track) seems to only update in increments of a set size, so at small speeds it get snapped back after updating. The W position (sidewaysness) isn't affected by this, so you can move sideways just fine.

Okay, I think I've figured it out! It's GM's float numbers being too imprecise, essentially. I added a bit of a hack to make the track position bigger to have more decimals around, and that solved the problem.

Here's the changes you need to do:

You could substitute the 1000 for any number you want, I'll do that with a macro and then export an updated version of the engine file.

Fixed version is uploaded! It's just a change of like 3 lines, so it might be easier to just manually apply the git diff to your existing project:

Perfect!! It works like a charm now! Thanks Yal!!

I must ask for something else if you don't mind: can you upload some documentation  about how to import 3d models into the engine? I mean, if that is possible. If don't, a tutorial explaining how to create them from paths, how to apply some textures and set the proper collision mask.

Thanks again, Yal!! You've made a wonderful job here!!

The models all are created from paths, I have no experience with "proper" 3D modelling (Blender etc) so I wouldn't really know how to import new ones. 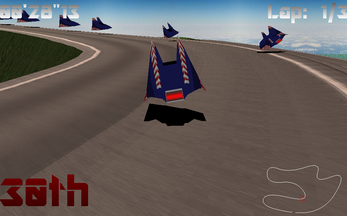 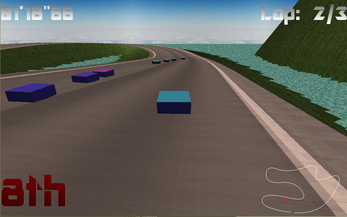 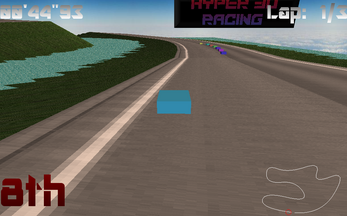