A simple Tactics-RPG engine made in GameMaker:Studio ages ago for a game jam; it ended up never being used and has collected dust since. But I still feel it might be useful to someone out there, so therefore I release it in a revised port with some cleanup and bug removal in place!

Welp, there's not really much else I can say. Try out the demo and see if you like it, I guess.

In order to download this asset pack you must purchase it at or above the minimum price of $4.99 USD. You will get access to the following files:

Hi Yal! I was interested in purchasing this Engine but had some questions about the licensing. I understand that you allow any games built with your "Stuff" to be legally distributed for free or commercially; but I was a little confused about section 22 of the licensing document, which states the following:

"Games and such made using Yal Stuff is considered to be derivative of Yal Stuff, not each other."

Also, for the second part of this section:

This is simply stating that if a work is produced using your "Stuff", the developer has to have legal ownership or permission to use whatever other assets or concepts they put into it (so, for example, if one was to develop an original title this point would be moot since they would obviously hold the rights to all of their own ideas.)

I just wanted to ensure I understood the legality of your software before purchasing it in case I ever end up making something with it in the future. Thanks!

The intent behind the "things are always considered derivative of Yal Stuff" clause is that you're protected, so people can't buy the same asset pack, quickly throw together a game, and then claim you infringe on their work. (Credit is optional unless stated otherwise - and so far no asset pack I've released has had a different credit statement - so you don't need to credit me for neither directly derivative stuff nor stuff derived from your own work)

The second point you bring up overlaps a bit with the first one but also is there to protect me from liability in case someone makes, say, a Fallout fangame and gets bonked by Beteshda  - if someone uses intellectual property they weren't allowed to use, they also broke the EULA and thus I can't be held responsible for it (and conversely just because two people bought the same engine/asset pack doesn't mean they're allowed to steal each other's intellectual property).

Sorry for making this thing so complicated, but generally it's safer to explicitly state everything in a legal document even if it's supposed to be obvious / common sense.

Thank you for the detailed explanation, all of that makes sense. And no apology needed! I'm glad you have a legal document that outlines all of this stuff in detail, it's important to know and a lot of other assets tend not to.

Can I open and run this asset in GM2?

I completely forgot this project existed so I had to check. And yeah, it seems to be working just fine in the latest version of GMS2! :) I've uploaded a GMS2.3 version of the source now so you wouldn't need to manually convert it.

I can finally get a vacation so I can buy it and try it out.

I sincerely appreciate the support for 2.3.
I'm very much looking forward to it.

Great game! I'm looking into making my own Turn based strategy game and this is a solid base to build it :)^^.  How long did it take you to code this o.O.
I would like to know if we can run it on GMS 2 ?

I don't remember anymore, but it's a pretty basic engine made for a game jam, so probably less than 7 days. (Depends a bit on how much I cheated by reusing code from my old projects... which I wouldn't disclose even if I remembered :P) I tried importing it into GMS2 right now, it works just fine for me (I'm on IDE v.2.2.0.343, runtime v.2.2.0.258).

Do you still support this engine? I'm quite a beginner at GM:S and understanding what is going on is really complicated for me. Hopefully, this would suit for beginners, and this is the only viable thing i can find about tactical game engines in GameMaker.

I'm thinking of buying and using this as a base for a tentative Super Robot Wars engine, which means most of this engine's core stuff might be changed to implement a similar gameplay style of the SRW series. If i were to plan to make a public engine and release it for free for the public, am i allowed to release a engine that takes this as a base?

I don't really like the idea of any of my assets being resold as assets somewhere else, because it's using my own stuff to directly compete with me (and potentially without putting in as much effort into creating them as I did - not gonna say you wouldn't), makes the copyright situation messy since the asset technically was created by multiple independent people, and a bunch of other reasons.... so I'd have to say no to this. (Having a derivative version of the engine available for free and as a fan project that could get into some IP law issues doesn't sound like a super tempting prospect either.)

Also, if you're planning to rework everything from scratch anyway, it might be less effort to try to make what you want from the start instead of retrofitting it into an engine that might not support it very well. I found a whole bunch of other tactics RPG stuff by just doing a Youtube search, so there's a bunch of it out there:

Doesn't actually matter anymore. I've got to know SRPG Studio rather than caring about this unfinished thing. Thanks anyway.

Fair enough, an engine that's 100% made for what you're trying to do is always gonna give better results.

Wow that was a very nice answer to JohnGames rude response. You took the time to answer their questions and even go out of your way to research help for them. I will grab your asset because of that  and also I really like your assets. Keep up the good work!

I'm sorry for being ignorant. I just have realized it is not nice to do a free edited version of a cheap .gmk file of 2 bucks.

I want to apologise for what i have said for being unrespective months ago.

When i said i wanted to make a "fork" or edit of your own engine and publicize it, i did not mean of actually keeping your assets. I assume you don't want me to publicise an edited version of your code as an edited engine.

I haven't bothered reading the license agreement, but to my realization i've noticed that i've done a mistake pretending that i should do a free edit of a really cheap .gmk source file. I'm really sorry. I'm not a great GML programmer and i still haven't bothered buying this thing, but i'll definitely do it one day, so let me just ask another question:

Could it be okay to use the engine privately with a devteam and release it without the source code included?

Apology accepted... it's been like half a year, I'd forgotten all about the thing by now, don't worry :P Just learn from it and be careful about saying too harsh stuff in someone's face next time, I guess.

Sharing with a team would be acceptable, also it's in the EULA (the human-readable TLDR is something like "If one team member has a copy, everyone in the team can use it without having to buy their own copy"). There's a human-readable summary at the top, you could just read that if you wanna know about the rules, the legal text is mostly there  to legally protect me. It has to be there even if nobody is gonna bother reading it, that's the rules of this day and age...

You will not BELIEVE how overjoyed I was to find an engine like this! I'm working on my own little TRPG, and I had thought I'd have to build it all from scratch. I'm certainly going to buy this engine, along with a little more of your stuff later down the road.

Glad you like it, I hope you find it useful down the line! :3

All of us good coders learned coding by copying existing stuff at first before we realized what it did, so don't fret too much about not doing everything yourself. Do it when you're ready for it, when you feel like you NEED to make everything from scratch to get it exactly the way you want it. Code doesn't rust or rot, you can reuse it as long as you feel it does what you need it to do.

Great game! I'm looking into making my own TRTS my self, so this was a great demonstration that Gamemaker has what it takes!
Other than the shoty graphics, small resolution screen and no win state/menus per say (though that's the demo idk how the paid version plays) This was a really charming example.
Best of luck and I will keep this on my watchlist!

is there a work around for this error cause I get it too. I was thinking of buyint it but this problem prevents me from doing so.

The problem is hardware-dependent, so there's not a lot to do if you have a graphics card that doesn't support ShaderModel 3. The simplest workaround would be not using the shader, which is the easiest way to fix it if you don't care about the palette swap system. If you do need it, though...

There's a bunch of workarounds discussed in this GMC topic, the original version of the shader didn't use a loop and thus were more compatible with older graphics cards at the expense of having a limit of 10 colors per palette: http://gmc.yoyogames.com/index.php?showtopic=58777...

The old GMC has been archived, but hopefully the info/code already in the topic helps.

There's also a new topic for the shader system here on the new GMC: https://forum.yoyogames.com/index.php?threads/retro-palette-swapper.7498/

(Not sure if it includes info about the old version of the shader anymore, though)

Thank you for the reply. I went ahead and bought your script. I wont be using the shader at this time, do I just delete the shd_pal_swapper ? Should I also delete the Palette Swap folder under scripts?

Deleting the shader itself should be enough (the help scripts won't do anything as long as you don't call them), and then just make sure you remove/comment-out any script calls that would use the system (e.g. shader_set()/shader_reset() pairs in the draw event of map & battle units)... it's never a good idea to leave in references to a resource that doesn't exist anymore.

Hey, just a heads up. You might want to check the Demo. I tried running it and it gave me this error:

Edit: Oops, forgot to mention, I'm running this on Windows 10.

Interesting... I'm running on Win10 myself. That error is because the shader than handles palettes didn't compile properly, and that in turn might be a problem with your graphics card running ShaderModel2 instead of ShaderModel3. ShaderModel3 is so ubiquitous nowadays I don't even check whether the shader compilation worked properly in the engine, but that might be a good idea after all. 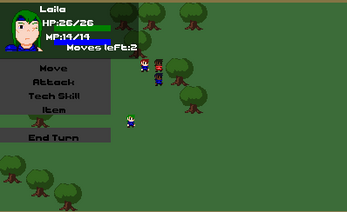 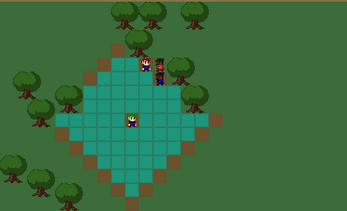